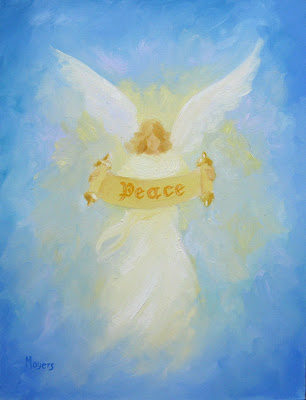 Merry Christmas to you all.
May you be blessed by God’s peace
in the year to come.
Posted by Mike Moyers at 12:01 PM No comments:

I Wonder As I Wander 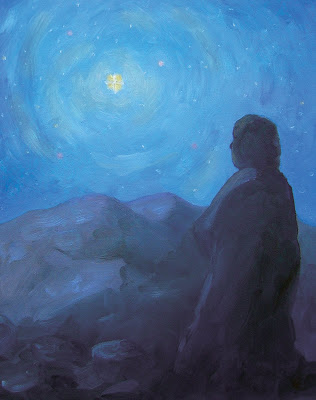 “I wonder as I wander out under the sky,
How Jesus the Savior did come for to die.
For poor on'ry people like you and like I...
I wonder as I wander out under the sky.
When Mary birthed Jesus 'twas in a cow's stall,
With wise men and farmers and shepherds and all.
But high from God's heaven a star's light did fall,
And the promise of ages it then did recall.
If Jesus had wanted for any wee thing,
A star in the sky, or a bird on the wing,
Or all of God's angels in heav'n for to sing,
He surely could have it, 'cause he was the King.”
Have you ever looked out at a starry winter sky and let your mind wonder? Wonder about the mysteries of the universe? Wonder about the God who made it all? Wonder about how that same God would love us so much as to come to us, meek and humble, and save us? That’s what memories and emotions this appalachian carol conjures in me.

Advent is a time of waiting, hope and wonder. It’s a preparation time before Christmas, like Lent is to Easter. A couple of years ago our church had an Advent series based on “I Wonder As I Wander.” This painting was the illustration for it. It shows a traveler gazing at the night sky in wonder at the “Christ Star.” The sky is also filled with other wonders. There are also 4 purple satellites orbiting the star. They represent the candles of Advent, making the sky a kind of cosmic Advent wreath.

A thought from Frederick Buechner has stuck with me this season. He talks about the manger, where The Word became flesh, is really the world. To God, coming to this world is just as much a sacrifice as being born in a manger of straw. I wonder if our creator and savior in some way becomes incarnate in our world still. For “God is with us” when we love each other in humility and comfort each other, wrestling and struggling with the dark and ugly parts of our lives. Like the traveler in the song, such mysteries makes my mind wonder.

In these days leading up to Christmas, I hope you take some time to pause from all of your wandering, gaze at the night sky and let your mind and wonder. There is so much to this existence we don't understand. There are still miracles out there be experienced. There are still marvels of God’s grace to bee witnessed. We but need to look and wonder.

You can listen to a performance of “I Wonder As I Wander” at this link. It is played on a hammer dulcimer. I think it is the best way to hear it. It reminds me of the song’s appalachian roots. It also has a haunting quality that I think best captures the mystique of the song. Again, you may want to close your eyes and let your mind wonder as you listen. That is how the image of this painting came to me.
Posted by Mike Moyers at 1:30 PM No comments: 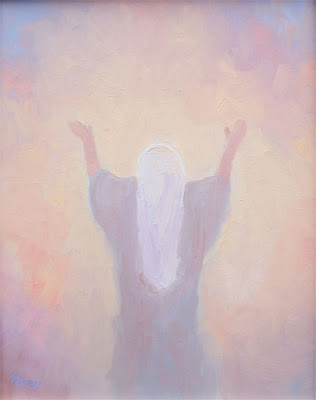 And Mary said:
“My soul glorifies the Lord
and my spirit rejoices in God my Savior,
for he has been mindful
of the humble state of his servant.
From now on all generations will call me blessed,
for the Mighty One has done great things for me—
holy is his name.
His mercy extends to those who fear him,
from generation to generation.
He has performed mighty deeds with his arm;
he has scattered those who are proud in their inmost thoughts.
He has brought down rulers from their thrones
but has lifted up the humble.
He has filled the hungry with good things
but has sent the rich away empty.
He has helped his servant Israel,
remembering to be merciful
to Abraham and his descendants forever,
just as he promised our ancestors.”
– Luke 1:46-55

When the expecting Mary visits her older cousin, Elizabeth, she realizes the validation of God’s promise to bring the Messiah to the world. She sings a song full of praise, prophecy and hope. It is known today as “The Magnificat.” One of my favorite musical interpretations of this song is “Holy is His Name,” by John Michael Talbot. This portrait expresses the emotions I feel when I hear that song. Many Christians sing or recite these words for morning or evening prayers. We would all benefit if we remind ourselves that God keeps His promises. We should live our days and nights in humility, service, adoration and expectation.

If you would like to hear the song that I referenced, click the linked text in this post. You may want to listen with you eyes closed as the images can be a bit distracting. Enjoy.
Posted by Mike Moyers at 7:04 PM No comments: