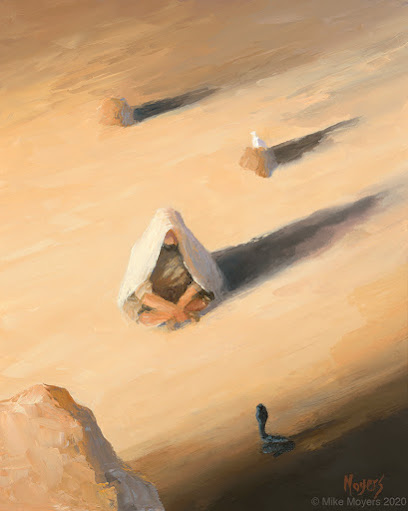 This painting depicts Christ during his 40-day time spent in the wilderness. The scene connects with Lenten disciplines such as prayer, fasting, and contemplation. At first glance, Christ appears to be alone, with his head covered to protect him from the harsh elements of the wilderness. But you soon begin to see the presence of a serpent and a dove—clues to signify that Jesus is very much not alone. The dove represents the presence and guidance of the Holy Spirit—who descended like a dove at Jesus’ baptism and led him into the wilderness. The serpent represents the mortal dangers in the wilderness. More importantly, the serpent also represents Satan, the tempter. The late light and long shadows in the composition illuminate a drama of light and dark alluding to the duality of good and evil in the human soul when conflicted with temptation.

Other themes in this painting relate to scripture and identity. In this painting there are three rocks. In the gospels of Matthew and Luke, Jesus is tempted three times. Each one is an attack on Jesus' identity as "The Son of God." With each temptation, Jesus repels Satan by using scripture. The three rocks represent the stability of scripture in times of temptation. However, the serpent hides in the shadow of the closest and largest rock. The gospels record that, in the third temptation, Satan manipulates scripture to achieve his goal. But even that attempt fails because Jesus is, himself, "The Word of God." He sits among the rocks unshaken by the serpent. What may first look like a moment of weakness, to which we can all relate, the painting transforms into a scene of victory.

Posted by Mike Moyers at 8:48 AM No comments: