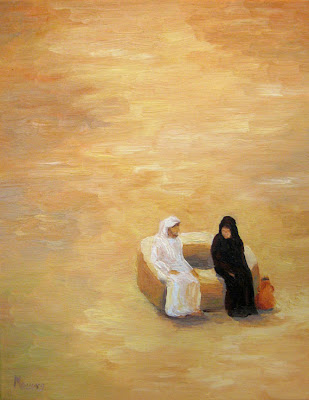 In the fourth chapter of the Gospel of John, the story of Jesus’ encounter with the woman at the well addresses how to quench that kind of thirst. This painting of “The Well” illustrates how the story speaks to me.

The scene is set in the heat of the day, the time of day that most people avoid the labor of fetching water from a well. The landscape is barren and dry. The composition is one of solitude. It is minimal almost to the point of being boring and easily overlooked. At first glance the whole piece is one of loneliness and drought.

We watch the discourse between Jesus and the woman form a distance – so we don't intrude on the privacy of the moment. The figures of Jesus and the woman are contrasted in white and black. The colors are classically symbolic of Christ’s righteousness and our brokenness. They also symbolize the divide between their respective cultures. The woman was Samaritan, a culture with whom Jews would not associate. Jesus dares to love her in spite of social labels and traditions. Jesus looks directly at the woman, speaking words of truth. The woman is guarded, not looking directly back. There is clearly a distance between them, but not for long.

As the conversation in the story continues, the drought in the woman's life becomes a flooded with renewal. Likewise, the painting transforms along with her. In their discourse, you can see the miracle of human interaction. You can see the wonders of belonging to a relational God. You can see that God DOES encounter us in very personal ways. Although the colors in this painting are dusty and dry, the strokes are arranged to give a subtle appearance as that of light reflecting on water. When you look at the painting in that light, the worn, dry path to the well becomes a river of Grace. The stone well looks less like an island and more like a floating raft. The two people are no longer traveling strangers. They are now traveling companions.

That is what the ”drink” offered by Christ can do for us. Through prayer and the love of others, we encounter God in very real ways. God’s Word revives us and saturates the dry cracks in our lives. When life seems full of dust and drought, we can feel refreshed, renewed, and alive. When we feel isolated and alone, we can find belonging.

May we all be so refreshed by God’s gracious gift in Jesus Christ. 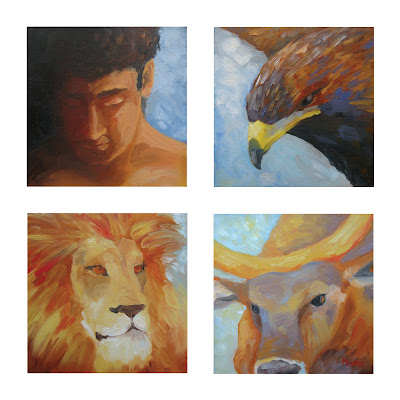 For centuries, the four Gospels have been depicted as certain winged creatures. I suspect this was done so illiterate followers of the faith could recognize an illustration to be that of a certain Gospel. Sometimes, a famous story or parable would be painted. And if that story was found in the Gospel of Matthew, the iconic image of Matthew would appear somewhere in the painting. Other times, all four Gospels would be carved on a door or cathedral facade. Traditionally, Matthew has been represented as a man, symbolizing Christ’s humanity. Mark, a lion, for Christ’s authority. Luke, an ox, for Christ’s sacrifice. And John, an eagle, for Christ’s spirituality.

This painting is a more contemporary take on the ancient images. These beings are not winged. But there is still a subtle lighting effect behind each one to hint at something spiritual. This composition is made up of four canvases. They are arranged to make a cross. They also take your eye on a circular journey that alludes to the “eternal” in these special writings. I wanted to explore the concepts inherent in each creature. How does it broaden our understanding to see Jesus as a human, a lion, an ox, or an eagle?

Take a look at these images, and recall your favorite stories about Jesus. For the most part, all we know about the life and message of Christ is found in these four books. And these four images can also speak volumes about the mystery of Christ, “The Word Made Flesh.”
Posted by Mike Moyers at 1:07 PM No comments: