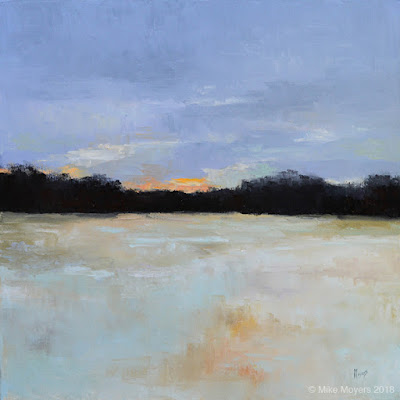 Posted by Mike Moyers at 8:28 AM No comments: 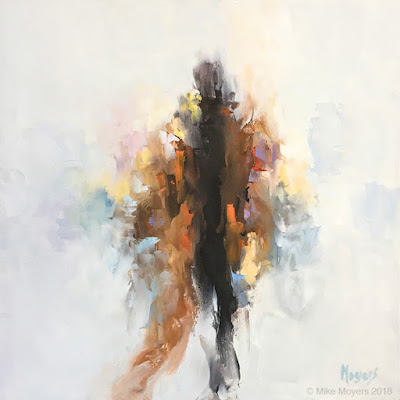 
Another abstract from the Gospel of John. This time from John Chapter 5.

Now in Jerusalem by the Sheep Gate there is a pool, called in Hebrew Beth-zatha, which has five porticoes.  In these lay many invalids—blind, lame, and paralyzed. One man was there who had been ill for thirty-eight years. When Jesus saw him lying there and knew that he had been there a long time, he said to him, “Do you want to be made well?” The sick man answered him, “Sir, I have no one to put me into the pool when the water is stirred up; and while I am making my way, someone else steps down ahead of me.” Jesus said to him, “Stand up, take your mat and walk.” At once the man was made well, and he took up his mat and began to walk.

This painting depicts the mystery of the healing itself. When people are healed by Jesus, they are completely made whole. Their bodies, their emotional well-being, their status in society... everything. So the painting explores all of those other things that are being made whole in the healed man.

Posted by Mike Moyers at 9:56 AM No comments:

From Water to Wine 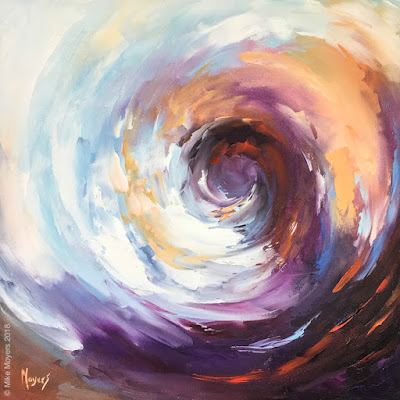 
I really enjoy painting abstract of Jesus' miracles. In the Gospel of John, there are no parables from Jesus. Rather, John uses the miracles as parabolic signs of God's kingdom. Painting these miracles in abstract form creates space for the mystery inherent in the miracle to take root in a more contemplative way.

Posted by Mike Moyers at 2:48 PM No comments: 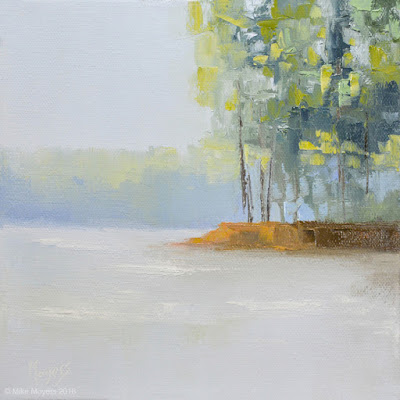 Some springtime colors from Tims Ford Lake in Tennessee.
Posted by Mike Moyers at 12:59 PM No comments: 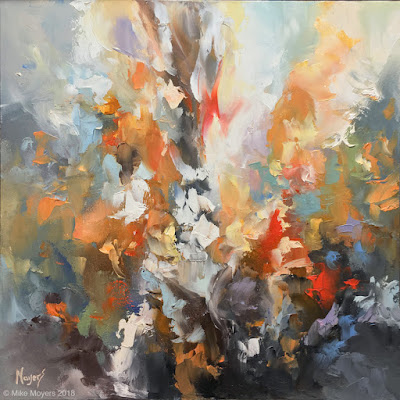 After this Jesus went to the other side of the Sea of Galilee, also called the Sea of Tiberias. A large crowd kept following him, because they saw the signs that he was doing for the sick. Jesus went up the mountain and sat down there with his disciples. Now the Passover, the festival of the Jews, was near. When he looked up and saw a large crowd coming toward him, Jesus said to Philip, “Where are we to buy bread for these people to eat?” He said this to test him, for he himself knew what he was going to do. Philip answered him, “Six months’ wages would not buy enough bread for each of them to get a little.” One of his disciples, Andrew, Simon Peter’s brother, said to him, “There is a boy here who has five barley loaves and two fish. But what are they among so many people?” Jesus said, “Make the people sit down.” Now there was a great deal of grass in the place; so they sat down, about five thousand in all. Then Jesus took the loaves, and when he had given thanks, he distributed them to those who were seated; so also the fish, as much as they wanted. When they were satisfied, he told his disciples, “Gather up the fragments left over, so that nothing may be lost.” So they gathered them up, and from the fragments of the five barley loaves, left by those who had eaten, they filled twelve baskets. When the people saw the sign that he had done, they began to say, “This is indeed the prophet who is to come into the world.”

Posted by Mike Moyers at 9:24 AM No comments: