Worthy Is the Lamb 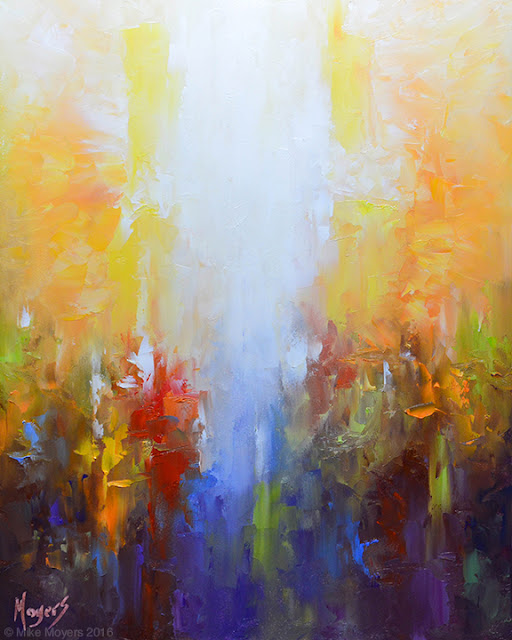 Then I looked, and I heard the voice of many angels surrounding the throne and the living creatures and the elders; they numbered myriads of myriads and thousands of thousands, singing with full voice,
“Worthy is the Lamb that was slainto receive power and wealth and wisdom and mightand honor and glory and blessing!”
Then I heard every creature in heaven and on earth and under the earth and in the sea, and all that is in them, singing,
“To the one seated on the throne and to the Lambbe blessing and honor and glory and mightforever and ever!”
And the four living creatures said, “Amen!” And the elders fell down and worshiped. 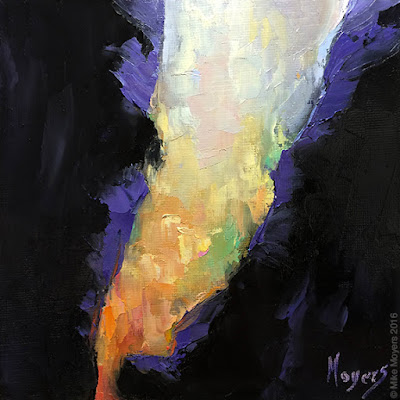 At that moment the curtain of the temple was torn in two, from top to bottom. 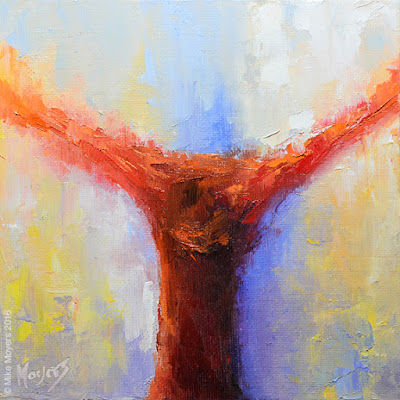 My God, my God, why have you forsaken me?
Why are you so far from helping me, from the words of my groaning?

O my God, I cry by day, but you do not answer;
and by night, but find no rest.
Yet you are holy,
enthroned on the praises of Israel.
In you our ancestors trusted;
they trusted, and you delivered them.
To you they cried, and were saved;
in you they trusted, and were not put to shame.
But I am a worm, and not human;
scorned by others, and despised by the people.
All who see me mock at me;
they make mouths at me, they shake their heads;
“Commit your cause to the Lord; let him deliver—
let him rescue the one in whom he delights!”
Yet it was you who took me from the womb;
you kept me safe on my mother’s breast.
On you I was cast from my birth,
and since my mother bore me you have been my God.
Do not be far from me,
for trouble is near
and there is no one to help.
Many bulls encircle me,
strong bulls of Bashan surround me;
they open wide their mouths at me,
like a ravening and roaring lion.
I am poured out like water,
and all my bones are out of joint;
my heart is like wax;
it is melted within my breast;
my mouth[a] is dried up like a potsherd,
and my tongue sticks to my jaws;
you lay me in the dust of death.
For dogs are all around me;
a company of evildoers encircles me.
My hands and feet have shriveled;
I can count all my bones.
They stare and gloat over me;
they divide my clothes among themselves,
and for my clothing they cast lots.
But you, O Lord, do not be far away!
O my help, come quickly to my aid!
Deliver my soul from the sword,
my life[c] from the power of the dog!
Save me from the mouth of the lion!
From the horns of the wild oxen you have rescued[ me.
I will tell of your name to my brothers and sisters;
in the midst of the congregation I will praise you:
You who fear the Lord, praise him!
All you offspring of Jacob, glorify him;
stand in awe of him, all you offspring of Israel!
For he did not despise or abhor
the affliction of the afflicted;
he did not hide his face from me,
but heard when I[g] cried to him.
From you comes my praise in the great congregation;
my vows I will pay before those who fear him.
The poor[h] shall eat and be satisfied;
those who seek him shall praise the Lord.
May your hearts live forever!
All the ends of the earth shall remember
and turn to the Lord;
and all the families of the nations
shall worship before him.
For dominion belongs to the Lord,
and he rules over the nations.
To him,[j] indeed, shall all who sleep in[k] the earth bow down;
before him shall bow all who go down to the dust,
and I shall live for him.
Posterity will serve him;
future generations will be told about the Lord,
and proclaim his deliverance to a people yet unborn,
saying that he has done it.

Posted by Mike Moyers at 1:08 PM No comments: 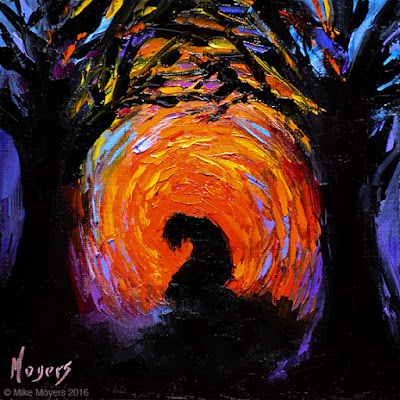 Then Jesus went with them to a place called Gethsemane; and he said to his disciples, “Sit here while I go over there and pray.” He took with him Peter and the two sons of Zebedee, and began to be grieved and agitated. Then he said to them, “I am deeply grieved, even to death; remain here, and stay awake with me.” And going a little farther, he threw himself on the ground and prayed, “My Father, if it is possible, let this cup pass from me; yet not what I want but what you want.” Then he came to the disciples and found them sleeping; and he said to Peter, “So, could you not stay awake with me one hour? Stay awake and pray that you may not come into the time of trial; the spirit indeed is willing, but the flesh is weak.” Again he went away for the second time and prayed, “My Father, if this cannot pass unless I drink it, your will be done.” Again he came and found them sleeping, for their eyes were heavy. So leaving them again, he went away and prayed for the third time, saying the same words. Then he came to the disciples and said to them, “Are you still sleeping and taking your rest? See, the hour is at hand, and the Son of Man is betrayed into the hands of sinners. Get up, let us be going. See, my betrayer is at hand.”

Posted by Mike Moyers at 2:17 PM No comments: 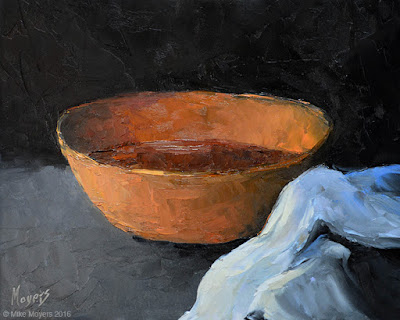 Posted by Mike Moyers at 3:12 PM No comments: 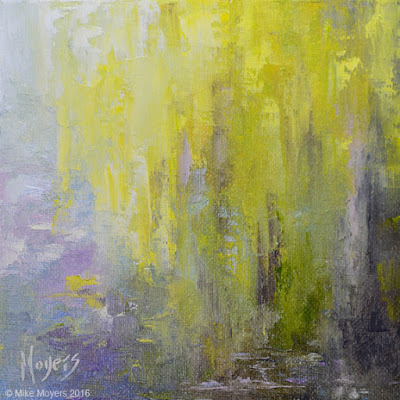 By the rivers of Babylon— there we sat down and there we wept when we remembered Zion.On the willows there we hung up our harps.For there our captors asked us for songs, and our tormentors asked for mirth, saying, "Sing us one of the songs of Zion!" 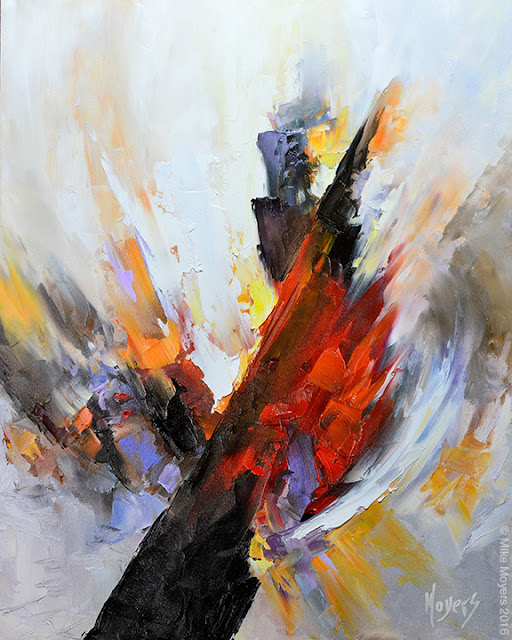 Then they came to Jerusalem. And he entered the temple and began to drive out those who were selling and those who were buying in the temple, and he overturned the tables of the money changers and the seats of those who sold doves;  and he would not allow anyone to carry anything through the temple. He was teaching and saying, “Is it not written,
‘My house shall be called a house of prayer for all the nations’?    But you have made it a den of robbers.”
And when the chief priests and the scribes heard it, they kept looking for a way to kill him; for they were afraid of him, because the whole crowd was spellbound by his teaching. 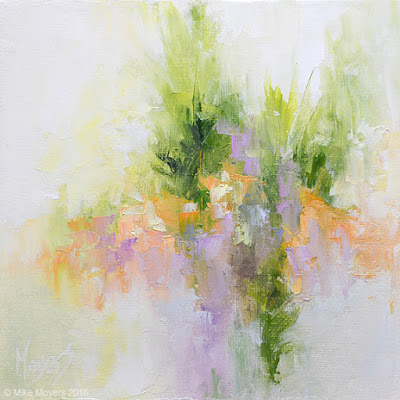 When he had come near Bethphage and Bethany, at the place called the Mount of Olives, he sent two of the disciples,  saying, “Go into the village ahead of you, and as you enter it you will find tied there a colt that has never been ridden. Untie it and bring it here.  If anyone asks you, ‘Why are you untying it?’ just say this, ‘The Lord needs it.’”  So those who were sent departed and found it as he had told them.  As they were untying the colt, its owners asked them, “Why are you untying the colt?”  They said, “The Lord needs it.”  Then they brought it to Jesus; and after throwing their cloaks on the colt, they set Jesus on it.  As he rode along, people kept spreading their cloaks on the road. As he was now approaching the path down from the Mount of Olives, the whole multitude of the disciples began to praise God joyfully with a loud voice for all the deeds of power that they had seen,  saying,
“Blessed is the king    who comes in the name of the Lord!Peace in heaven,    and glory in the highest heaven!”
Some of the Pharisees in the crowd said to him, “Teacher, order your disciples to stop.”  He answered, “I tell you, if these were silent, the stones would shout out.”
Luke 19:29-39
Posted by Mike Moyers at 10:22 AM 1 comment: 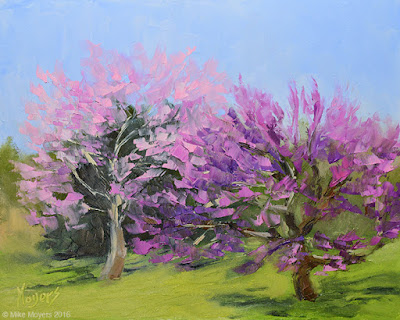 Commit your way to the Lord;    trust in him, and he will act.6 He will make your vindication shine like the light,    and the justice of your cause like the noonday.

Posted by Mike Moyers at 1:44 PM No comments: 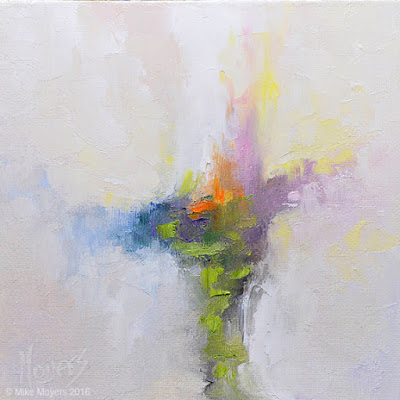 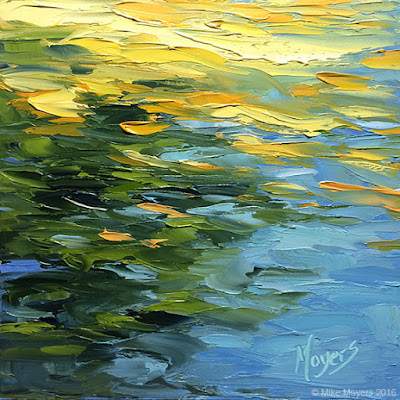