Dancing with David: David and Jonathan 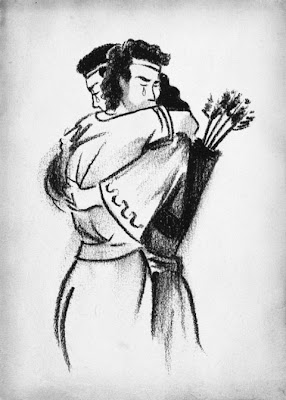 David, before taking the throne, lived in the palace as a servant to King Saul. He defeated the Philistine champion, Goliath. He became a champion of Israel, himself. He played the lyre before Saul in his royal court. And he became good friends with Saul’s son, Jonathan. David and Jonathan shared a covenant of equal respect. Jonathan gave David his robe and sword. They were the closest of friends. As time goes by, Saul became jealous of David's popularity and plotted to kill him. David had to go on the run from Saul. In a tearful embrace, the two princes said farewell. The love and kindness of Jonathan made it possible for David to escape death. And that grace remained a part of David's soul for the rest of his life. We should all be lucky to have at least one friend that “has our back” and inspires us to live in gratitude to grace.

Although this is not one of my favorite renderings from this series, I still think it sums up the moment well. It depicts that mournful goodbye. The quiver, worn by Jonathan, alludes to the signal he used to warn David. The embrace has strong lines around the arms. This is that kind of hug that is more like a body slam full of emotion. The tears seem a bit sappy, but they serve as a symbol. These men were crying. Yes, men can cry for their friends. We should not feel it a weakness to cry for our brother. And we should dare to love others so strongly.

LORD, who may dwell in your sanctuary?
Who may live on your holy hill?
He whose walk is blameless
and who does what is righteous,
who speaks the truth from his heart

and has no slander on his tongue,
who does his neighbor no wrong
and casts no slur on his fellowman,

who despises a vile man
but honors those who fear the LORD,
who keeps his oath
even when it hurts,

who lends his money without usury
and does not accept a bribe against the innocent.
He who does these things
will never be shaken.