Dancing with David: David and Mephibosheth 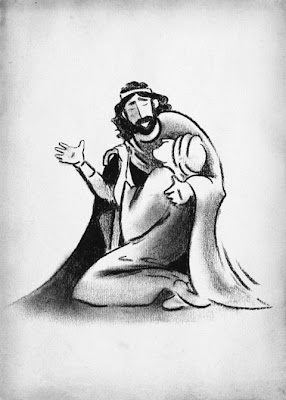 Saul and Jonathan were dead. David was crowned King. But because of the love that Jonathan showed David, he continued to show kindness to the descendants of Saul. In spite of how horribly he was treated by Saul, David asked “Is there anyone still left in the house of Saul to whom I can show kindness for Jonathan’s sake?” They brought Jonathan’s son, Mephibosheth. He was crippled in both feet and worthless by the standards of the day. He even asked David “What is your servant that you should notice a dead dog like me?” David showed kindness to Mephibosheth, cared for is finances and re-established a place of prominence for him.

In this illustration, David supports the crippled Mephibosheth in his arms, whose legs are drawn awkwardly to accentuate his deformity. In some ways, this composition resembles a pieta with David holding the “dead” lovingly in his arms. Mephibosheth is helped not out of pity or by any action he has done. David loves him because of who he IS. And more importantly, David loves him because Jonathan first loved David.

This is a wonderful story of grace. May we be so moved by God’s love for us.
“Is there any child of God still out there to whom we can show kindness for Christ’s sake?”

How very good and pleasant it is
when kindred live together in unity!
It is like the precious oil on the head,
running down upon the beard,
on the beard of Aaron,
running down over the collar of his robes.
It is like the dew of Hermon,
which falls on the mountains of Zion.
For there the Lord ordained his blessing,
life for evermore.