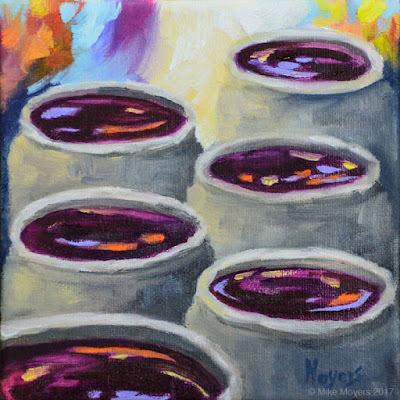 On the third day there was a marriage at Cana in Galilee, and the mother of Jesus was there; Jesus also was invited to the marriage, with his disciples. When the wine gave out, the mother of Jesus said to him, “They have no wine.” And Jesus said to her, “O woman, what have you to do with me? My hour has not yet come.” His mother said to the servants, “Do whatever he tells you.” Now six stone jars were standing there, for the Jewish rites of purification, each holding twenty or thirty gallons. Jesus said to them, “Fill the jars with water.” And they filled them up to the brim. He said to them, “Now draw some out, and take it to the steward of the feast.” So they took it. When the steward of the feast tasted the water now become wine, and did not know where it came from (though the servants who had drawn the water knew), the steward of the feast called the bridegroom and said to him, “Every man serves the good wine first; and when men have drunk freely, then the poor wine; but you have kept the good wine until now.” This, the first of his signs, Jesus did at Cana in Galilee, and manifested his glory; and his disciples believed in him.
There are no parables in the Gospel of John. Jesus' miracles are parable enough. They are "signs" revealing the kingdom reality. There are so many things to meditate upon in this story. Mary's perspective. Jesus' perspective. The servants' perspective. Spend time with this story however you like. But as for this commissioned painting, the focus is on the the jars of water.
The wedding and the main characters in the story are represented in the festive colors in the background. The focus is on the stone jars now filled with wine, reflecting festive colors dancing on the surface. They jars are filled to the brim with plain water. But after being changed by Christ, thanks to the faith of his mother and executed rather quietly, the water is transformed to wine and becomes the star of the show and an abundant gift of grace to all.

God can take the most ordinary of things and, with grace and love, make them extraordinary. Simple canned goods can become life-savers for food-insecure families. Smiles can become ambassadors of hope for hurting souls. Everything in our very ordinary lives can become extraordinary gifts of grace. Our very lives can be used as signs of God's grace to the world. With God all things are possible.