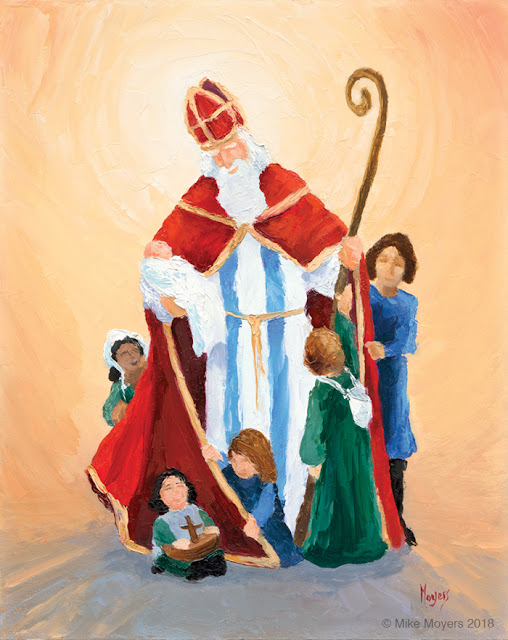 St. Nicholas
Oil on Panel
Commissioned
On Exhibit in the Basilica of St. Nicola in Bari, Italy


In the spirit of Christmas, this is a commissioned portrait of St. Nicholas of Myra. The painting will be part of an exhibit at his home church, the Basilica of St. Nicola in Bari, Italy.

According to the society of St. Nicholas website, He lived around 300 CE and is said to have attended the council of Nicea (from where we get the Nicean Creed). His legends revolve around helping young people and the poor. These legends inspired future generations in later centuries in the form of St. Nick (celebrated in much of Europe) and Santa Claus (celebrated in America).

In this portrait, St. Nicholas, dressed in traditional bishop's attire, engages young children of all ages. He even holds an infant to remind us of the gift of the Christ Child. One of the children plays with a toy ship. St. Nicholas is considered the patron saint of children and sailors among many other groups. The lighting behind St. Nicholas alludes to the giving light of Christ that shines though the stories of the saint's life.