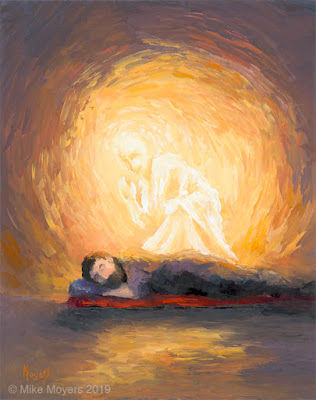 For me, discerning a direction from God is difficult. After prayers for guidance, the following days and months are filled with moments where I listen and watch for a sign of guidance. It takes a aggregation of small moments to discern a path. Sometimes the message is loud and clear. But for the most part, I find the longer route of discernment to be the norm.

Joseph had a big decision to make—even bigger that he could ever imagine. He found out that his fiancé was pregnant—and the child was certainly not his. He was deliberating on whether or not to dismiss her and break off the engagement. It was the appropriate thing to do in the eyes of the Law. It was the easier thing to do in the eyes of society. But it was Mary's eyes, when she told him the news, that troubled him. Should he stay committed to Mary, accept the scandalous situation, and be a father-figure to the Messiah? It's all just too crazy. Faith and tradition only go so far. Joseph believed in the coming Messiah, but this was very different from what he expected. Tradition and the Law told him that the right thing to do was to just walk away.

Then The Angel spoke to Joseph in a dream. That must have been some dream. If it were me, I would always wonder if my mind was just playing around in REM state. However vivid the dream was, it was enough to embolden Joseph's faith and inspire him to stay with Mary. I believe this story is a great testament to Joseph's trust in God, the quality of Joseph's faith, and the strength of his love for Mary.

Like Joseph, may we look with Advent eyes for God's will.
And may God grant us the courage and humility to follow Him.
Posted by Mike Moyers at 7:12 AM